DISCERNING PEOPLE KNOW THIS IS  GODS FADING  RAINBOW (sign of Covenant Promise  of Protection from Natural Elements of water.. FLOOD OF NOAH (Genesis 9: 13-17)


​9 January 2018.same sex marriages ALLOWED TO TAKE PLACE LEGALLY begins in our Summer
and also this on THE EXACT SAME DAY..HAILSTONES 1000 S OF LIGHTNING STRIKES IN SYDNEY..Our gay capital

THIS WAS PRECEDENTED BY SYDNEYS HOTTEST EVER DAY 47.3C...EXTREME TO EXTREME... WEATHER

MALCOLM TURNBULL OUR PM  SAID "IF WE INTRODUCE IT THE SKY WONT FALL IN WILL IT?"

NO BUT IT  NEARLY DID MALCOLM.BUT YOU WERE FAIR.. 60% OF AUSTRALIANS VOTED IN FAVOUR OF IT WELL NOW WE WILL REAP WHAT WE HAVE SOWN!!!

OUR CLIMATE HAS AND WILL CHANGE MUCH MORE
​AND YES....WE CAUSED IT!!!
.

PLEASE TAKE A LOOK AT THE SIMILARITY OF INDIA UNDER THE CURSE OF DROUGHT AND NOW AUSTRALIA IN OUR WORST EVER DROUGHT!!! 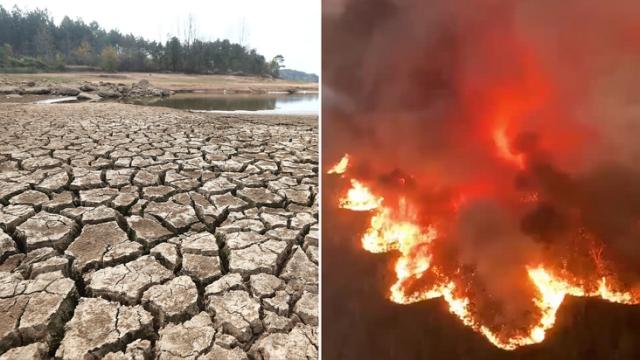 ARE YOU SURPRISED WE ARE NOT ....IT WAS INEVITABLE AND GOING TO GET WORSE!
as mans sin becomes worse and worse so does the enviroment they live in please note the drought similarities to Indian picture .....the lucky country Australia  HAS LOST ITS BLESSING Sadly and THE CLIMATE CHANGE PEOPLE S VOICE WILL GET LOUDER AND LOUDER NOT HAVING A CLUE WHAT CAUSED IT sadly

​BEHOLD I THE LORD GIVE RAIN WHERE AND WHEN NEEDED IF YOU OBEY MY COMMANDMENTS IF NOT I WITH HOLD THE RAIN AND CONSEQUENCES FOLLOW YOUR DISOBEDIENCE ..Paraphrased

sir elton john the instigator of the gay marriage push in Australia has his concert washed out 31/01/2020 after a 43 degrees day.....storm came from no where some one said
​ ...CORRECTION STORM CAME FROM SOME ONE WHOS NOT TOO HAPPY WITH THIS gay thing in Australia ..MORE TO COME ...Article down below

Elton John forced to flee stage as flash storm hits concert in Yarra ValleyElton John was rushed off stage during a “showstopping” burst of torrential rain And more wild weather is forecast this weekend.

Megablaze burns a fifth of ACT....THIS IS WHERE IT WAS ALL LEGISLATED AND YES THESE THINGS HAPPENED ON THE SAME DAY..WORK IT OUT..EINSTEIN SCIENTISTS OF CLIMATE CHANGE ..GOD IS CONTROL OF THE WEATHER! not us nor can we change it with out changing our ungodly behaviour and repenting of our sin...AND TURNING BACK TO GOD www.howtofindlife.com
Music legend Elton John has been dramatically covered with a tarp and rushed off stage after torrential rain forced him to abandon his outdoor show in Victoria’s Yarra Valley.
The wild weather struck about an hour and a half into the performer’s Friday night set, A Day on the Green festival organisers said.
“Best show stopper I’ve ever seen! It was 43C all day then out of nowhere a flash storm hit (with) wild winds!” one woman at the concert, Susan Ellis, wrote on Instagram.

Ms Ellis took this photo at the concert, showing rain lashing the stage. Picture: Instagram/Susan Ellis“That’s not a beam of light in the photo but sideways rain pelting down straight onto Elton John and his grand piano. The piano is f***ed, so are the drums (rained even reached the back of the stage) and all the camera gear!” she said.
“Elton played on until he was taken off stage as they got scared he might get electrocuted. Craziest part of the tour so far. A chair even flew off stage … and nearly hit me.”
Video posted online appeared to show rain and wind lashing Sir Elton and his piano as he performed Funeral For A Friend at the front of the stage.
“This is the moment the storm hit and someone threw a tarp over Elton John,” one fan wrote on Twitter.