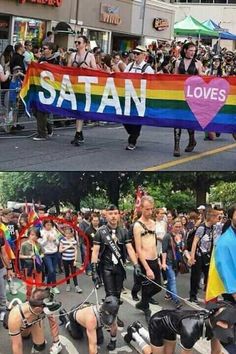 30 AUGUST-September 4 –SOUTHERN DECADENCE..open sexual perversion for all to see
http://www.neworleansonline.com/neworleans/festivals/gaylesbianfestivals/southerndecadence.html

Southern Decadence is an annual six-day event held in New Orleans, Louisiana by the gay and lesbian community during Labor Day Weekend, climaxing with a parade through the French Quarter on the Sunday before Labor Day (first Monday in Sept)

What happened in 2005 and 2008.....Wiki pedia
Hurricane Katrina[edit]For 2005 Southern Decadence was officially canceled as a result of Hurricane Katrina.[12] However, a very small group of residents who still remained in the French Quarter celebrated the event anyway. An abbreviated parade took place in the French Quarter with some two dozen participants. Most were French Quarter hold-outs; there were also at least a couple of people who had to wade in through flooded streets from other neighborhoods to get there.
As the city was officially being evacuated at the time, a police officer at first attempted to stop the small observation of tradition, but one of the participants was able to produce the parade permit issued pre-Katrina showing it was a scheduled legal event, and the small procession was allowed to continue. National media reporters noted the event. It was the first parade in New Orleans after the hurricane, the most recent previous New Orleans parade having been the Krewe of OAK "Midsummer Mardi Gras" parade the night before the city's mandatory evacuation.

]Due to the approach of Hurricane Gustav and a mandatory evacuation notice, some events on Saturday and all official Southern Decadence events after Sunday, August 31 midday were canceled for 2008. As a result of Sunday's parade being canceled, the 2008 Southern Decadence Grand Marshals, Paloma and Tittie Toulouse, returned for 2009.
WHAT UTTER FOOLS

BY NOW YOU HAVE REALISED THERE IS SOMETHING VERY SUPERNATURAL GOING ON HERE .. A FOOL SAYS THERE IS NO GOD AND DELIGHTS IN EVIL ...THE BIBLE SAYS

​A COMMON SENSE LOGICAL PERSON SAYS  THERE IS SOMETHING GOING ON HERE PROBABLY  BY A GOD WHO HATES SIN  BUT LOVES THE SINNER and maybe you are even fearful of being trapped in one these events which are OCCURRING SO FREQUENTLY Especially in THE USA
So Why in THE USA ..Go to ...MENU....MORE  ..LIST OF EVENTS  and you will discover WHY?

You are Right to be be FEARFUL OF THESE EVENTS IF YOU HAVE NOT MADE YOUR PEACE WITH GOD ( a term Billy Graham used So So Frequently .....Ah its all b.......t you say .
My friend if you were  to be Suddenly killed in one of these hurricaines you would find out that IT  WAS NOT bs

You have the Choice NOW to find out one way or another COME TO THE CROSS NOW or wait until you are dead AND WAKE UP IN HELL then ITS TOO LATE..JUDGEMENT IS SET FOR EVER THERE IS NO SECOND CHANCE IN HELL..On earth you can have
A SECOND CHANCE AT LIFE .. BE BORN AGAIN..
JESUS SAID "UNLESS A MAN OR WOMAN IS BORN AGAIN THEY CANNOT ENTER INTO THE KINGDOM OF GOD HEAVEN"
JESUS SAID ALSO HE IS THE WAY THE TRUTH AND THE LIFE NO MAN COMES TO GOD BUT THROUGH HIM ...You are 10 seconds away from A NEW LIFE AND SALVATION..

if you have not made your PEACE WITH GOD you need to do it RIGHT NOW!.

​HEAVENLY FATHER I COME TO YOU AS A SINNER I REALISE I HAVE SINNED AGAINST YOU AND I ASK FOR YOUR FORGIVNESS PLEASE CLEANSE ME FROM ALL MY SINS I BELIEVE THAT LORD JESUS DIED ON THE CROSS AND ROSE AGAIN
I ASK YOU LORD JESUS TO COME INTO MY LIFE AND BE MY LORD AND SAVIOUR IN JESUS NAME.
CONGRATULATIONS YOU ARE NOW A CHILD OF GOD ..please go to www.howtofindlife.com for more information
GOD BLESS YOU

MORE PROOF YOU SAY ....LETS GO OVERSEAS AND EXAMINE THEIR
CALENDAR OF CALAMITY
​